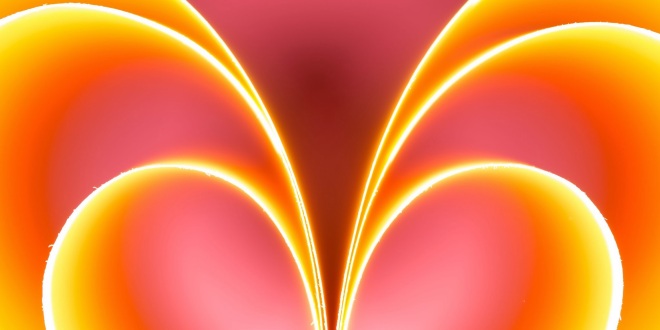 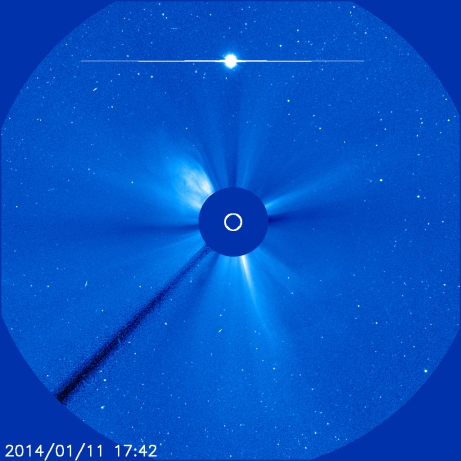 The far-out 2017 inferior solar conjunction of Venus takes place at 4 degrees Aries, officially beginning a new Aries-themed journey of descent, cleansing, transformation, and awakening to self that will take place between now and September 2018.  The tone for this journey is being set by the events and configurations building now and exacting over the next two weeks.  Lots of charts ahead so let’s dive in.

March 25th 2017, Sun conjunct Venus exact trine Lilith.  The Aries cycle of Venus is going to be centered around themes of unifying the shattered self, de-compartmentalizing, de-colonizing, remembering who we were before we were traumatized, and evoking images of wild, free-range children, unbothered by their bodies, scratched from stones and dry grass, mud between their toes.  Nudity unrelated to sexuality, aggression unrelated to hatred. 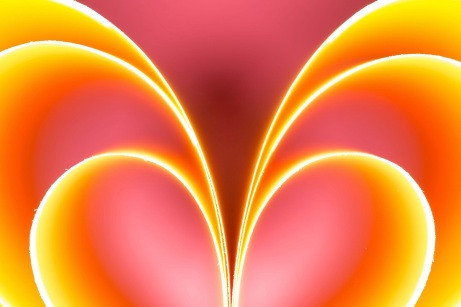 When Venus stationed retrograde on March 4th, Isis the illuminator was at Zero Pisces conjunct the south node.  Now during Sun conjunct Venus, the Moon is at Zero Pisces and Isis is conjunct Neptune, calling us back to the inner child and beyond, to the ancestral memories stored in our DNA, if that’s how far we have to go to remember how to embody the Wild Child Archetype represented by Sun conjunct retrograde Venus in Aries trine mean Black Moon Lilith in Sagittarius. 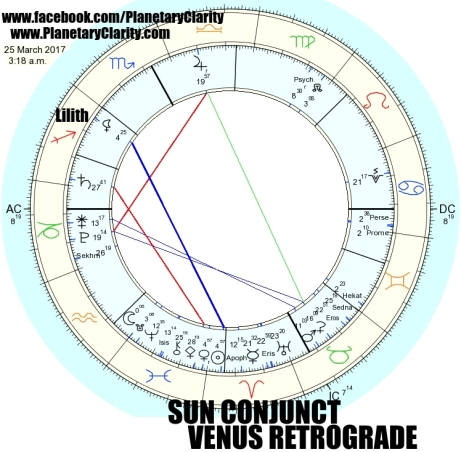 The chart for Sun conjunct Venus, and all of the following charts, feature Saturn stationing retrograde at 27 Sagittarius square Chiron in Pisces.  During Sun conjunct Venus, Saturn is square to both Chiron and Athena.  Athena soon crosses into Aries but Saturn’s square to Chiron is a long-lasting fixture that will remain.

The other long-lasting triangular configuration, seen above and on all the charts below, involves Jupiter retrograde in Libra, and his square to Pluto in Capricorn.  As Mars transits conjunct Ceres in Taurus, they form a quincunx to Jupiter and a trine to Pluto- a “learning triangle” that provides a map to solutions and tension relief for the epic conflict of the Jupiter-Pluto square.

Jupiter’s first square to Pluto last November exposed peak power struggles, most prominently experienced by us in America on a macro-level as the fallout of the presidential election.  Pluto-Jupiter power struggles also affected personal relationships.  Jupiter’s 2nd retrograde square to Pluto on March 30th is seeing the next chapter unfolding, watching last November’s “winners” deal with the mess they have gotten themselves into, on the macro-level as well as in our intimate spaces.  Weak egos struggling and fighting to come out on top at any cost will never find peace or satisfaction.  But for those of us who were consciously working through the first square last November, to identify what blockages we have inside of us that prevent us from feeling heard, the second square should witness a major breakthrough in effective communication and getting needs met in our relationships.  In August, when Jupiter squares Pluto for the third and final time, we’ll face the ramifications of the breakthrough, and as Jupiter finishes his transit through Libra, he will opposite Uranus and Eris again, and our orientation towards conflict resolution will be completely transformed. The next chapter for Jupiter is a transit through Scorpio, Pluto’s sign… but back to the current Jupiter-Pluto square…

At the moment that the square exacts, the Moon is transiting Taurus and tucked snugly between Mars and Ceres, flooding our hearts with the desire to do better for ourselves and for the ones we love, right when we need it most, at the height of this Pluto-Jupiter crisis.  Mercury in Aries meets Saturn by trine, giving a voice to our quest for greater honesty and integrity. Apophis is also in Aries, opposite Jupiter and square Pluto, reminding us that we are never truly in control of these processes.  The most skilled and experienced surfers didn’t achieve their mastery by learning to control the waves.  That’s not how any of this works.  We are re-training our own mindbodies.

On  April 2nd, three days after Jupiter retrograde squares Pluto, Ceres exacts her trine to Pluto.  Earlier this month Mountain Astrologer published an article on Ceres and Pluto by Shirley Soffer and reading it is mandatory- a brilliant and thorough examination of the relationship between our solar system’s most prominent dwarf planets.

Also at this time, Athena is conjunct Venus Rx at Zero Aries, while the Sun sits at 13°, the degree that Venus stationed retrograde, which emphasizes the Aries themes of Venus Rx- and  reminds us that Athena is the goddess of wisdom but also the goddess of war.  There is a great treasure trove of wisdom to be found in the soul of the Aries Wild Child.

As Ceres, the Earth Mother, exacts her trine to Pluto, the Moon enters Cancer, the sign of mothers, forming an exact square to Venus Rx.  As the Moon transits through Cancer, it conjuncts asteroid Persephone, the daughter of Ceres, and then transits sextile Mars/Ceres and opposite Pluto in Capricorn, Persephone’s abductor and consort. I go in depth on the relationship between Persephone, Ceres, and Pluto in Summertime Persephone, so I’ll skip that analysis here, and just summarize the synchronicity of this Cancer Moon transit during Ceres trine Pluto as the brute strength of the Bear Mother, the mother of the Wild Child, who not only gives life and protection, but can also trust the Wild soul of the Child and let them go, initiating the Child onto its own life path.

Juno is getting into the interesting part of her transit through Capricorn- building conjunction to Pluto.  In May, she stations retrograde at 18° while Pluto is at 19°.  So Juno spends two months this summer within 3 degree orb of Pluto without actually completing a conjunction.  In August, she stations direct at 2 Capricorn and then finally crosses Pluto in November, separating quickly, well into Aquarius by new years.  A fascinating encounter between the Queen of Heaven and the ruler of the Underworld. While their identities and themes are starkly polarized (Female/Male, Heaven/Hell, Boundaries/Intrusion, etc)  their effect on each other in pragmatic Capricorn feels positive. Pluto in Capricorn is about the elimination of obsolete institutions, and Juno’s Capricorn retrograde will give us the opportunity to dismantle obsolete boundaries.

In a rock solid trine to Pluto and Juno, Mars and Ceres are joining together in Taurus. And just like Pluto and Juno are starkly polarized male/female energies, Mars and Ceres are similarly polarized. The pace of Ceres is the pace of mother nature, allowing things to incrementally unfold. The pace of Mars is about making things happen, now.  They’re opening a channel of communion to the righteous destruction of Pluto and Juno, helping us grok the reality that tearing down the old, and building the new, are not mutually exclusive activities.  We can, and must, be doing both.

Which brings us to April 5th, and Saturn Station Retrograde. At the exact moment of reversal, the Moon is situated in Leo, expanding the learning triangle between Jupiter, Pluto, and Mars/Ceres into a lampshade. Apophis is in Aries, trine Saturn. And by this time, Venus has returned to Pisces and is conjunct Chiron, square Saturn.

Saturn square Chiron has been about keeping us honest, pushing us to strive for greater integrity.  Now that Saturn is stationary and Venus is conjunct Chiron, this square may even cause us to seek out the places where our integrity is weakest, so we can face the truth about ourselves and have an opportunity to raise the bar.  The trine from Apophis is a real wild card, in the final degrees of Aries known for unexpected explosions.  Remember that the Aries Wild Child is not a liar, cheater, or thief.  To be truly Wild, a heart must stand up to the naked truth.  Really, this is not a time to cut corners with your integrity or the consequences could be completely beyond what you anticipated.

In this lampshade, the Jupiter-Pluto square is mirrored by the square between Moon and Mars/Ceres.  This adds a layer of complexity to the conflict, but due to the Moon’s rapid transit, it is temporary.  And within the heightened tension, there appears a magician’s tool… The energy of this moment is likely to be overwhelmed by the challenges of Saturn stationing, but the sextile between the Moon and Jupiter should be easy to feel if you seek it out- find it, and hold on to this cosmic lucky charm.  What do you have around 17°-20° Leo on your chart?  Your luck will come to fruition five days later during the Libra Full Moon conjunct Jupiter on April 10th, followed by Venus Station Direct in Pisces on April 15th. Stay tuned for all this and more from Planetary Clarity.