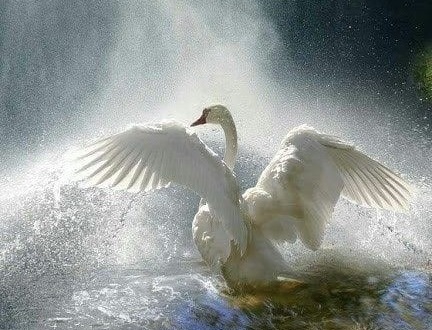 February 23rd 2020: Pisces New Moon, in the chart cast for my location the New Moon and Mercury Rx are in the 12th house, with Neptune exact conjunct the Ascendant. The New Moon connects to an aspect pattern that symbolizes the unseen personal processes that drive the most dramatic and unexpected developments.

At 4° Pisces, the New Moon is trine the north node in Cancer, and exact sextile Mars 4° Capricorn, which was the degree of the December 25th solar eclipse (only eight and a half weeks ago). Mars inseminates the unfolding eclipse energy, and the trine to Uranus in Taurus amplifies the transmission.

The merge of luminaries in the hidden realm of Neptune’s mystery is a meditation on baptism where the old form can be shed. The new form seems shocking in its departure from what was before, when it is in fact the result of staying committed to the daily striving of growth. Growing up is unbearably difficult work for ugly ducklings who don’t have any idea what kind of true self they are even becoming. Positive intentions to manifest the outcome of becoming an adult duck are never going to work. Our journey to self-realization takes a different path.

Lilith (mean lunar apogee) is entering her long-term square aspect with the mean lunar nodes that will last throughout the month of March. Both Lilith and the nodes are factors that help us visualize the Moon’s orbit and give context to interpretations of the Moon as an astrological symbol. The intensity of a New or Full Moon is usually influenced heavily by its connections to Lilith and the nodes.

September of 2018 was a punctuation mark, a major timeline shift with a distinct before and after, when I was permanently awarded full custody of my son. Mars retrograde over Lilith conjunct the south node- which was actually conjunct my natal south node in Aquarius- gave me a robust sense of moral clarity regarding the patterns I was intentionally breaking and unhealthy relationships I was leaving in the past. But throughout 2019 and still to this day I have been attacked with lies and re-traumatized by the legal system, forced by court order to continue in patterns that are harmful to myself and to my children. The timing of our opening statements being made to the court of appeals is in synchronicity with Lilith square the nodes.

Mars, oh Mars, I am a native Sun conjunct Mars in Aries, I am Mars, by default I embrace the opportunity for war, my whole life I have been badly mauled by the beasts of my spirit, but to love myself is to love them, to tame them is the pain of growing up. Under the Pisces New Moon I invoke Swan Magic and I state my intentions to be obedient to the pace of the Universe unfolding (which might otherwise be called, “the will of God”) With Lilith conjunct Chiron in Aries at the midpoint of the New Moon and Uranus, square Mars and the lunar nodes, it is a baptism of the gutter.

Read more with Tarot Clarity – Lilith in Aries – The Hermit