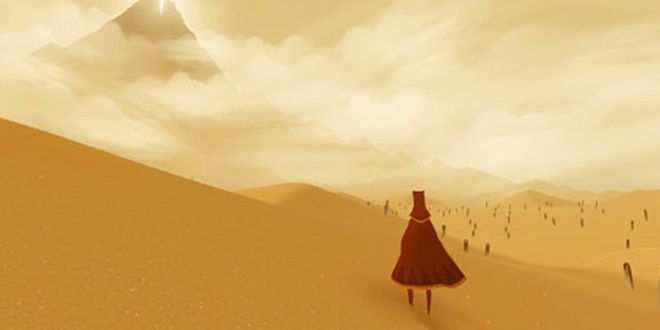 For the last several years, the Sun’s transit through the sign of Leo has brought major milestone experiences, introducing game-changing circumstances and life-altering manifestations that occur when the Sun (along with any other accompanying planets and asteroids) transit trine the rude awakener Uranus in Aries, and square to the transformative underworld of Scorpio.  This year is no different, with a Leo New Moon chart so deep and nutty that for the first time, I decided to make the chart into an animated gif.  If you want to skip the nuts and bolts and get right to the New Moon meditation, scroll down to the end.

Let’s break it down piece by piece, starting with the Lion’s Gate. 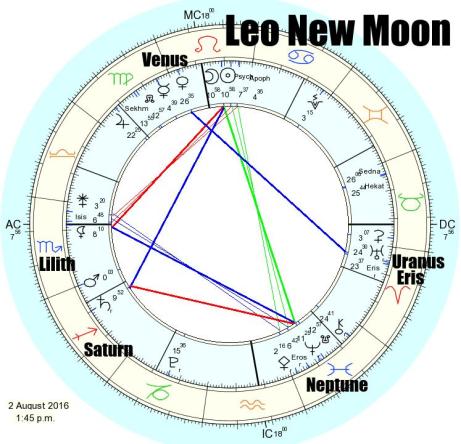 Most prominently, the Leo New Moon aspects Saturn square Neptune, the defining aspect of this era.  The New Moon is also square to Lilith in Scorpio.  Lilith is building a trine to Neptune that will be within orb throughout August and September, playing a major role in the astrology of Virgo season, as the Sun and Venus oppose Neptune, square Saturn, and sextile Lilith.  More on this in an upcoming post on Saturn’s transit of Sagittarius.

Lilith, Neptune, and the New Moon are each trailed by not one but two asteroid companions that add so much depth to this picture.

Lilith is joined by Isis, solar goddess, as well as Juno queen of Heaven, whose theme is boundaries within relationships.  As this goddess trio transits Scorpio, we feel the need to withdraw, to turn our desire to nurture inward, to care for ourselves rather than others, and/or sever ties to relationships that just do not seem worth the work anymore.  It is empowering, but it is bittersweet.

Neptune is joined by Eros and Athena, both retrograde, which adds to the depth of Neptune’s tendency to confuse.  Athena is wisdom and strategy, Eros represents the journey of learning how to express one’s love and desire in a way that is not completely selfish or self-conscious.  Under Neptune’s shadow, these themes may fall under the spell of obfuscation, wishful thinking, or running away from these issues altogether.

The Sun and Moon are joined by Psyche and Apophis, electrifying, radical asteroids.  Psyche is the pair of Eros and represents the journey to become completely conscious of oneself as a pre-requisite to loving and being loved consciously, without fears like insecurity or jealousy.  Only one thing can be said about asteroid Apophis.  He is a chaos fucker.

Our understanding of this aspect pattern must take into consideration that Saturn, at 9 Sagittarius, is slowing to a halt in preparation for his direct station exact conjunct fixed star Antares, heart of the Scorpion.

The Lion’s Gate is completed by Venus transiting trine the conjunction of Uranus and Eris in Aries, translating their unprecedented electrifying effect into a very personal sensory experience.

The second layer of this chart, beneath the Lion’s Gate, is an astonishing Kite aspect between the four major goddess asteroids- Juno, Vesta, Ceres, and Athena.

Juno, Vesta, and Athena are in grand trine in water signs.  Ceres in Taurus opposite Juno guides the feminine impulses, while Mercury in Virgo opposite Athena leads the masculine impulses. Ceres will eventually turn retrograde in Taurus and return to Aries for a second conjunction with Eris and Uranus.  Mercury will cross the north node before his next retrograde, always an epic experience that revolutionizes our ability to mentally process where we are with our karma and better understand how to unfold that karma in alignment with our highest truth.  Apophis, tucked under Psyche and the New Moon in Leo, is the unavoidable wild card, tossing a hearty dose of chaos onto our efforts to bridge the above mentioned themes of Juno in Scorpio (withdrawal, solitude for self-care, cutting ties), with the loving, welcoming warmth that we feel with mother Ceres in the sign of the garden.   Chart placements in the vicinity of 3 Capricorn are experiencing this as a grand sextile, an incredibly fruitful and productive structure.  Chart placements around 3 Aquarius are experiencing a grand square/grand cross opposite Apophis, and may be the ones who are having the rugs pulled out from underneath, for worse or for better.

The final layer of the chart focuses on the Pisces/Virgo axis, with three major oppositions including Mercury opposite Athena from the previous chart.  Here we can also see Neptune on the south node, opposite asteroid Sekhmet on the north node, and Jupiter opposite Chiron.  Chiron, Neptune, and Athena are all retrograde in mysterious Pisces; Mercury, Sekhmet and Jupiter are all direct in tactical Virgo.  Jupiter at 22 degrees will clear his own retrograde shadow as he transits opposite Chiron, heralding the tangible manifestations of re-integration, our expanded awareness of self that creates the structure of day in, day out self care that we require to live with our past trauma in a healthy way. 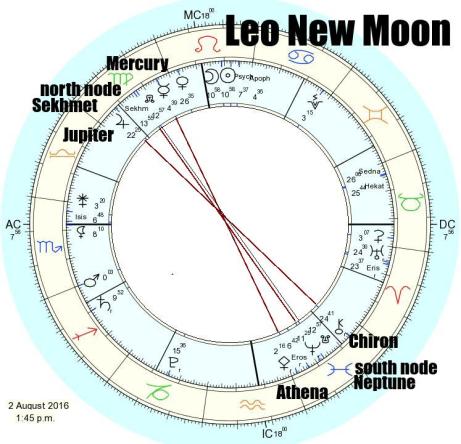 Sekhmet opposite Neptune is an epic conference between incomprehensible gods.  Sekhmet the ancient mother of the sky, Neptune the ancient father of the sea.  Both completely transcend labels of masculine and feminine. Aligned with the lunar nodes into a bolt of lightning, crackling deep into the mystery that we must offer our surrender to experience, surrender to the mystery that cannot be explained or taught.  (As I was creating the above chart, my computer glitched out and I managed to acquire this screenshot.  This is not the first time Sekhmet has messed with my computer.)

It’s a cliche to say “It’s about the Journey, not the destination” and yet so many of us humans still have the quest for a destination deep in our subconscious, driving our thoughts and actions, our desires and insecurities, pushing us outside of ourselves to find something that doesn’t exist, resulting in confusion, depression, anxiety, and addictions.  During this Leo New Moon, set an intention to consciously let go of this.  Set an intention to redefine your life as an endless journey and cast aside any fears that prevent you from welcoming this approach to life.  Open up to the possibility that the Journey is where you can find and re-connect to the parts of your true self that were broken, hidden, and buried, beneath everything from the generational dna level trauma, to the abuse we’ve personally survived, to the daily microaggressions most of us face in a white supremacist racist capitalist culture.  These sources of trauma can’t be erased or eradicated.  If that is our wish, then we are erroneously focused on a destination.  The deep subconscious belief in, and desire for, a destination is potentially the means by which we are standing in our own way.

Our Journey is ours and ours alone, but we are not alone on the Journey either.  Relationships are in fact the frontiers that we must explore if our Journey is to be a Journey of Healing. Healing, becoming fully integrated, re-connecting, whatever helps you best describe your experience with returning to this true self, is not a process that will ever be “complete.”  There is no destination that will give us final satisfaction.  Surrender to the mystery of the never ending Journey.