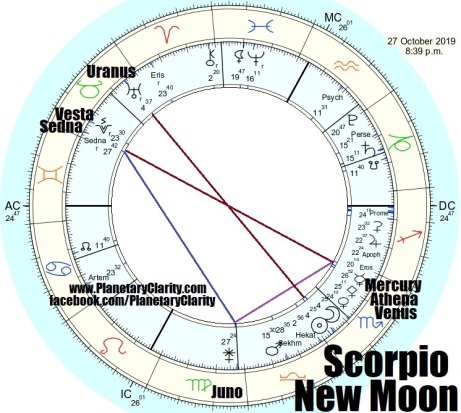 The Scorpio New Moon accompanies the cross quarter day marking the end of fall and the beginning of winter, as the plant kingdoms of Earth’s northern hemisphere expose empty branches and brace up for the cold, we hang skeletons from our front porches and paint skulls in memory of our ancestors. We embrace emptiness. Stripped down to the bones, the veil between spirit and physical is thinnest. This year these energies are magnified in fisheye lens by Mercury’s station, and embodied by the shockers of Uranus in Taurus.

Hekate, the oracle at the crossroads, joins Sun and Moon on this holy day, and provides guidance when we need it most as the Sun transits opposite Uranus.

Visit The Tarot Clarity Gallery: Mood Board for the Scorpio New Moon

Vesta’s journey through Taurus, stationing retrograde exact conjunct Sedna, has been a major indicator of how the energies of Uranus is Taurus are manifesting as challenges with loss of sacred places and the loss to our sense of identity when we no longer have access to needed resources. Vesta returns us to the knowledge of the sacred hearth, returns us to our commitment to fueling the inner flame.

Juno in Virgo is the true Queen of Heaven, the executive director for Earth’s 3D matrix and the laws governing energy exchange. The highest expression of Juno in Virgo is the alignment of healthy boundaries that serve as powerful coping mechanisms during times of pronounced instability in a generally unstable world.

The Moon meets Venus for the second time since Inanna ascended as the Evening Star, opening and activating the Root Chakra’s receptivity to awareness of safety. This is a fear-conquering transit, exposing the intimate threats to our psychological well-being that can’t be killed by a hero, but can be transformed by enlightened awareness, grounding, and connection.

When Mercury’s apparent motion stops, it’s a dance with our planet that stretches the perception of time. Hours seem like days, yesterday seems like weeks ago. This station point is opposite Sedna, and met by Inanna’s ascension through the Root Chakra gate. With asteroid Athena there too, and Hekate conjunct the Sun, I walk through the valley of the shadow of death, and I am not afraid, because I know I am not alone.