May 18th 2019: Full Moon 27° Scorpio opposite Sun conjunct Sedna 27° Taurus, the natural culmination of the lunar cycle that began with the Scorpio New Moon of November 2017, which was also exactly opposite Sedna.

In November of 2017 my entire life had been destroyed. Ripped away from my home, my family, and my sanity, I sunk to the bottom, crushed by the pressure of the ocean above me, hemorrhaging from stumps.

For that Scorpio New Moon I talked about the transformative rage of Sedna and said I was “embracing the emptiness, and trusting in a future where manifestation and nourishment beyond what we can currently imagine will fill the places that are now shockingly null.”

Sometimes my words are prophecies that give birth to new worlds. Other times they are just life rafts that allow me to survive for a little while longer.

Under the Scorpio Full Moon, I am returning to my Sedna meditation.

This Scorpio Full Moon features Sun conjunct Sedna; Apophis conjunct the north node in Cancer, opposite Saturn/Persephone/Pluto conjunct the south node in Capricorn, forming sextiles and trines to Hekate in Virgo opposite Neptune in Pisces; and Mars in Cancer trine Lilith in Pisces. 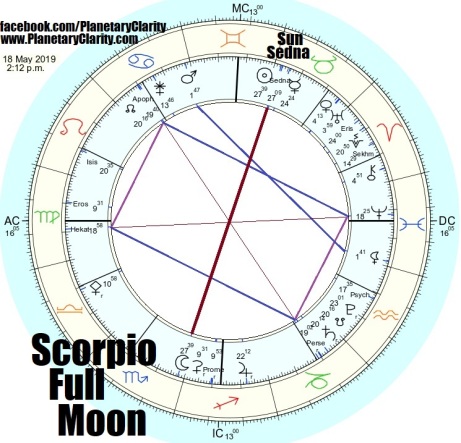 When relatives in our home have mistreated, rejected, or lied about us, the resulting feelings of anger and shame tend to stay under the surface. Mars in Cancer trine Lilith in Pisces can activate these issues and bring the conflict out into the open.

Apophis in Cancer opposite Saturn in Capricorn can take the form of a blatantly dangerous illusion that everything we have worked so hard for, has been all for nothing. Aligned with the lunar nodes, indicates that our reaction to this temporary sensation of horror will have permanent karmic consequences.

The Apophis threat is interwoven with Hekate in Virgo opposite Neptune in Pisces, a bridge between the swirling chaos of hallucination, and the order of the oracle.

The Sun is aligned with Sedna, amplified by the reflection of the full Moon. Sedna’s trauma centers on the concept of holding on vs. letting go- she is a victim of the act of violence when she refuses to let go of the boat. The holding-on-to of the past is the mechanism of the pain. And on the ocean floor she remains a victim as long as a part of her wishes she was still in the boat. There is another entire level of letting go that leads to transcendence.

Sun/Sedna at 27° Taurus joined by Mercury 24° Taurus, aligned with Capulus and Algol emphasizes the similarities between the stories of Sedna and Medusa. Mercury makes it personal, and gives the air an anticipatory feeling- on May 21st, Sun conjunct Mercury in alignment with the Pleiades at Zero Gemini.