January 31st 2019: The Moon transits conjunct Venus and asteroid Persephone aligned with the Galactic Center, 26°-27° Sagittarius.   This is the fourth Moon-Venus conjunction since Venus has risen as the morning star, symbolizing Inanna’s descent through the fourth gate, the cleansing of the Heart chakra. 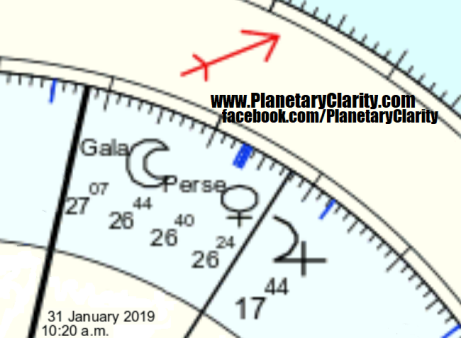 The dance of the Moon and Venus represents the journey of Inanna in and out of the Underworld, which is the ancient ancestor of the myth of Persephone.  The Moon-Venus conjunction representing Inanna’s descent through the Heart chakra gate meets asteroid Persephone just before she enters Capricorn, to join Pluto in the sign of Earth’s Winter, and she will remain in Capricorn all year, until December 14th, due to her upcoming retrograde.

The alignment to the Galactic Center physically illustrates a powerful and simple meditation, making a greater level of heartspace awareness accessible. A new wave of initiation into consciousness.

Many of the uses of the Heart chakra have been culturally associated with the physical heart: it is the foundation of our experience of emotions, and therefore the basis of how we filter our reality. The Heart chakra is our organ for multidimensional perceptions and expressions of emotion, and it is each human individual’s point of connection to the source of consciousness.

It’s a common experience for those who identify as empaths to have grown up not knowing how to tell the difference between other people’s emotions and our own.  Even when empathic boundary confusion isn’t an issue, it’s been widely normalized for intimate relationships to actually be built on the idea of people holding each other responsible for our emotions- showering our love when they make us happy, and punishing them when they make us feel bad.  These unhealthy patterns gradually contaminate the Heart chakra. And then for those of us who have complex trauma from emotional abuse, the accumulated layers of stuck emotions in the Heart chakra can be debilitating.

As the Moon passes over Venus, Persephone, and the Galactic Center, we declare our intentions to cleanse the Heart chakra.

One of the most simple and most powerful meditations for re-centering into the heartspace is to visualize your own Heart chakra as a micro fractal expression of the black hole at the center of the galaxy, and zoom out into macro unity with the Milky Way.

2019 has the potential to be a breakthrough year in the history of humanity, since discoveries that expand our knowledge of outer space have an equal and opposite reaction of increasing our collective knowledge of inner space: The Event Horizon Telescope‘s mission is to produce the first actual image of a black hole.  From EHT’s Key Science Objectives:

“When people think of a black hole, they might picture it as a giant vacuum cleaner that sucks up all nearby matter. In fact, it’s actually relatively difficult for matter to fall into a black hole. If matter isn’t too close to the black hole and feels only gravity, it can orbit the black hole indefinitely. Something more than gravity is needed to get the matter close enough to the black hole for the black hole to eat it. This process is called accretion, and it is driven by friction.

Because black holes are so massive, but at the same time so compact, matter needs to give up a lot of energy to fall all the way in. As a result, some accretion disks around supermassive black holes are incredibly bright, and can outshine all the billions of stars in their host galaxy put together.

An important unanswered question is: What creates the friction that allows the black hole to grow? By taking a picture of the accretion disk around a black hole, the EHT will test this hypothesis and work toward a better understanding of the processes that allow accretion disks to form and black holes to grow.” 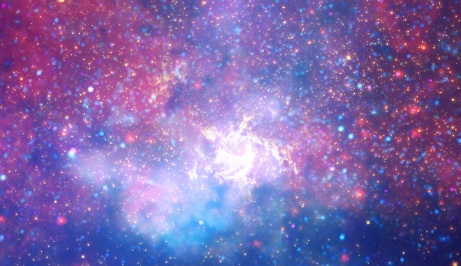 detail of the galctic center from NASA/Chandra/Hubble/Spitzer’s epic 2009 portrait of the Milky Way.  See the full size image here

The power of the black hole heartspace meditation allows us to observe and define the subtle energies at work in the Heart chakra: The basic features of mass, spin, and charge; The fundamental existence of a dynamic boundary that defies explanation because it cannot be direcly observed (yet); and the inescapable mysteries on a universal scale of quantum entanglement, entropy, and time travel.

Read More about the Galactic Center with Planetary Clarity: