At 22° Gemini, the Sun and Moon’s only aspect is a Sesquiquadrate to Mars and the mean lunar south node at 8° Aquarius, with an orb of less than half a degree.

A semisquare is 45°, a square is 90°, and a sesquiquadrate is 135°. The quadrate aspects divide the zodiac with the same geometry as the wheel of the year: the equinoxes, solstices, and cross-quarter days divide the ecliptic into eight divisions of 45 degrees.

This is one of the foundational ideas behind evolutionary astrology, and many educational materials can be found for free online with the right search terms. But the concept I want to focus on right now is the transitional nature of the quadrate aspects. The 90° square aspect is easily recognizable as the experience of a challenge, where a decision must be made to move forward, or remain within the blockage. The 45° and 135° also represent the experience of a challenge, a transition from one phase to the next.

It is important to notice that the sesquiquadrate is exactly halfway between the trine (120°) and the quincunx (150°). During the open, flowing, building trine, energy is magnetized to manifest the intentions that were seeded in the conjunction. During the quincunx, the energy is lopsided and out of balance, prompting us to either find a way to integrate, or to compartmentalize even further. But what happens between these two aspects, during the sesquiquadrate? 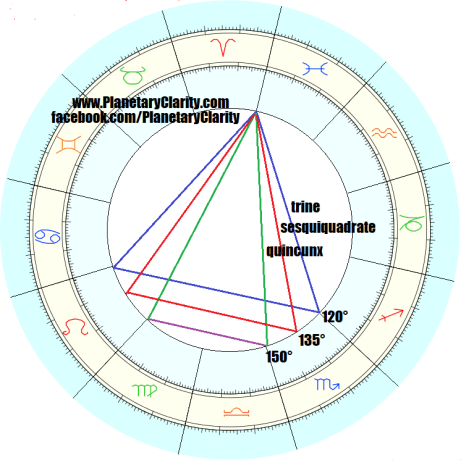 While pondering this aspect over the past week, I happened to see an audition from the TV show So You Think You Can Dance. A young man explained to the judges that he decided to channel all of his negative emotions into dance after witnessing his mother’s murder. His audition was thrilling and passionate, but as the judges pointed out, his technique entirely lacked finesse. They encouraged him by saying that he had all of the necessary elements in place to become a great dancer, but in order to reach the level where he could be a contestant on the show, he needed to learn how to “rein it in.”

I couldn’t get this young man’s audition out of my mind. He took the most traumatic experience imaginable and used it as his motivation to be a dancer. He had made a conscious choice to transmute his pain into art. But he was at a place in his journey where his emotion was still apparently unmanageable, and while his dancing clearly released a massive amount of pain from deep within him as he moved across the stage, he was, as the judges observed, “all over the place.” He hadn’t yet learned how to control those emotions, and use them to communicate a story to an audience with his dance.

This is the challenge of the sesquiquadrate. It is a crisis of self-analysis that requires us to learn how to “rein it in.”

Last year’s conjunction (0°) of the Sun and Mars seeded the energy that has grown into today’s sesquiquadrate (135°). This is the First Harvest of the Sun/Mars cycle that began during the final week of July 2017.

From AstroMatrix on Sun Sesquiquadrate Mars:

“Impatience is a shortcoming with this aspect. What you instinctively want to do is often at odds with what you think you should do. Not being in touch with your desires causes you to change your plans and your goals frequently. The manner in which you assert yourself can sometimes offend others, as it seems to be too raw and impatient. Defensiveness and volatility are traits that you learn to manage as you mature.”­

With Mars slowing to station retrograde in close proximity to the south node, the impulses are going to be attracted back into the less-mature expressions of emotional outbursts or other types of activities that are satisfying to the negative emotions, but cause further conflict in the immediate environment. The presence of the dark Moon joining the Sun in Gemini gives those of us who are prone to honest self reflection and deep thought an opportunity to observe these tendencies as they arise within ourselves, and make the conscious choice to figure out how to rein it in.

During the Gemini New Moon, Mercury in Cancer is forming a square to Chiron in Aries, multiplying the transformational energies with an opportunity to make changes around the way we think about, and talk about, our experiences of trauma and healing.

Asteroid Prometheus in Virgo is approaching his third and final opposition to Neptune, allowing us to imagine that there truly is enough room for us to integrate our trauma into our whole selves.

“Learn to struggle in such a manner that is indistinguishable from dancing; after all, there is no end in sight.” -Lily Kay Ross