December 17th, 2017: Six months ago, the Sagittarius New Moon conjunct the Galactic Center facilitated a channel that transmitted a message to me only a few days after the most brutally humiliating defeat that I’ve ever been dealt in my adult life.  The message was the phrase “metal flashing.”

“The Sagittarius New Moon is cosmic metal flashing for our planet and everyone on it. We’re face to face with what we are perceiving as our worst mistakes, which means we have finally gained enough awareness to acknowledge the damage that has crept through the cracks into our interiors when we didn’t even understand that we were being hurt, and actually take steps to prevent it from continuing to happen.  Set new moon intentions to learn how to protect yourself from the type of damage that you are just now learning to identify. This is a massively powerful time for breaking unhealthy patterns as the solar/galactic transmission passes through Pholus, Saturn, and Eros.  We are getting built up with cosmic reinforcement, and we will see the results during the Sagittarius Full Moon on May 29th 2018.” from Sagittarius New Moon: Metal Flashing

And yeah, I broke the patterns.  I did.  I identified the damage and I stopped it from happening any more.  And the situations that made me feel defeated last December have essentially reversed, and I have gone from a state of powerlessness to a state of being in control.

So… why doesnt this moment feel triumphant?  Why don’t I actually feel any bigger or better or stronger? 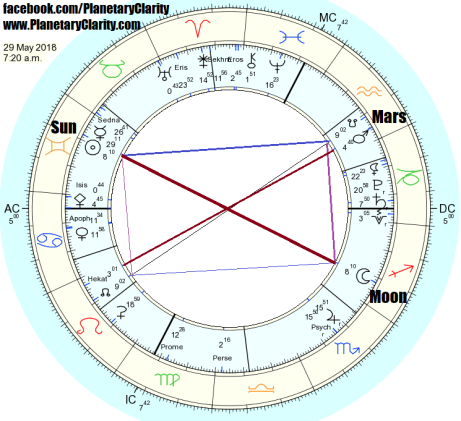 The Sun in Gemini is trine the south node in Aquarius, which is being approached by a conjunction from Mars, who is slowing down for next month’s retrograde station.

The fixer, the fighter, the get up and go, by any means necessary.  There are few places I can think of where Mars might be more isolated and bound, than stationing and going retrograde conjunct the south node.  Thwarted ambitions lead to fury.  We shrink down into ourselves and put on the biggest thickest armor we can find.  If you’re not with me you’re against me, and start swinging.  Trapped inside your own armor for long enough, fury distorts and destroys the original ambition. Nothing is left but the urge to fight. Here’s the thing about a thick coat of armor: it’s impenetrable.  If nothing can get in, nothing gets out, either.

Asteroid Hekate meets Mars in opposition as she approaches the north node in Leo.  Our Oracle, our guidance.  Hope is the belief that the world is better than we can currently imagine.  Hekate, I surrender.

Time, is of course, not linear.  We are, of course, going around in the same circles doing the same things.  The trick is to not be fooled into thinking that you aren’t getting anywhere.  I have worked my ass off to change the way I relate to my own life since the Sagittarius New Moon, but now during the Sagittarius Full Moon, I don’t feel any differently about myself.  The major situations in my life have reflected the changes, but my attitude has not.

The Sun in Gemini is transiting conjunct fixed star Aldebaran, while the Full Moon joins Antares, the heart of the Scorpion constellation in Sagittarius. The main urge of the life force is to have valor, to have honor: right thought, right speech, right action.  This full moon is lighting up everything about our emotional selves that stands in the way of valor.  Winning in life is great and all… I Am Titanium, no enemy on this planet can step to me, except… the calls are still coming from inside the house.

And it’s worth mentioning that titanium actually makes very shitty armor.  It isn’t dense enough to protect the wearer from projectiles.  It is an extremely lightweight metal with a very high strength-to-density ratio.  It can withstand extreme temperatures.  It’s resistant to corrosion.  They use it to make rockets.