April 17th 2018: Two days after the epic Aries New Moon conjunct Uranus, the Moon meets Venus for the second time since she has risen as the evening star, representing Inanna crossing the sacral chakra gate on her way out of the Underworld.

I am writing this post better late than never, to continue my ongoing study of the Venus cycle, the myth of Inanna, and the chakra system.  (In-depth explanations and links to past articles in this series can be found here and here.)

This Moon/Venus conjunction corresponds to the sacral chakra, which is our organ for multidimensional perceptions and expressions of intimacy. We use it to probe our environments for vibrational information about relationships, and we use it to create a connection with Gaia that informs our social identity, our sexuality, our ability to trust. As the Moon crosses over Venus we state our intentions to open our sacral chakra.

At 21° Taurus this Moon-Venus conjunction falls opposite Jupiter in Scorpio, and in an exact trine to Pluto in Capricorn; one day previous, Jupiter completed his second retrograde sextile to Pluto.  Jupiter’s companion asteroid Psyche also makes her mark on this powerful configuration. 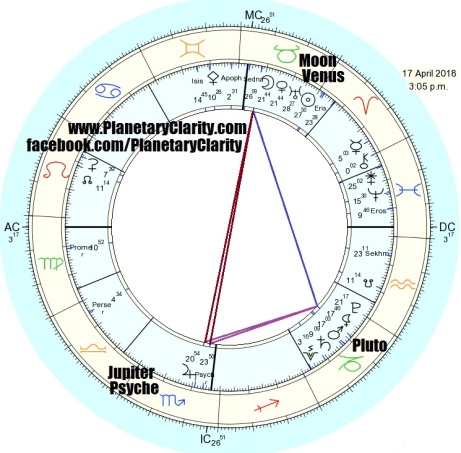 Jupiter and Psyche in Scorpio have been dredging out the deepest unknown realities of what we really believe and what we really think since Jupiter entered Scorpio six months ago.  When the Sun opposes Jupiter a couple of weeks from now, I’m expecting massive breakthroughs and realizations and new awareness blossoming where there was once darkness and confusion.  To prepare you for that moment, the Moon and Venus are now giving you the opportunity to look back at where you were at the beginning of this journey, and lovingly hold who you used to be in the palm of your hand.

Inanna’s descent through the sacral chakra gate took place last September, just before Jupiter entered Scorpio, and shortly after the Virgo New Moon.  For that new moon, I wrote the following four intentions:

-I will allow a greater awareness of my own wounds and the wounds of my life partners.

-I will allow a greater awareness of relationship as a separate entity that exists beyond the individuals that participate in it.

-I will allow the increased level of maturity it requires to allow others to truly see me, thoroughly and completely.

-I accept greater responsibility to honor and respect those who have trusted me with their full selves.

Unknown to me at the time (because it is always unknown to mortals) these intentions were supercharged with Kali Magic, and shortly thereafter she ripped me away from my intimate relationship which I cherished immensely, but was in fact very unhealthy.  At the time I wrote those words, during Inanna’s descent down through the sacral chakra gate, I was in near-total denial about the scope and extent of my own suffering.

Now as Inanna rises through that gate, changed and awakened, in a perfect trine to Pluto in Capricorn, I am personally experiencing a truly life-changing transformation, seeping in through the volcanic seething womb-wisdom of the open sacral chakra.  I am stepping up to true mastery of all four of those intentions.  I am able to communicate about highly emotionally charged topics without laying my cards out on the table all at once.  There is peace where six months ago there was war.  I am facing the truth about my wounds without fear (with a great deal of sadness, indeed…  but I do not fear it).