One of the most important aspect patterns of 2017 is the grand trine between Uranus, the north node, and Saturn.  All three are slow movers on the zodiac and interact with each other for months at a time.  This week, two major transits come to completion: the mean lunar north node in Leo exacts its one and only trine to Uranus in Aries, while the Gemini Sun transits opposite Saturn in Sagittarius before reaching the midpoint of the Uranus/north node trine.  The trine between Uranus at 27° Aries and the mean lunar north node at 27° Leo lasts for days, and the aspect pattern involving Uranus and the north node forming a kite with Sun opposite Saturn is already in place on June 13th when the Uranus/north node trine becomes complete… but before we take a look at that configuration, here’s the chart of the Moon transit at the precise minute that the mean lunar north node crosses exactly 120° from Uranus… at 13° Aquarius, the Moon forms a perfect grand trine with Jupiter who is motionless stationed direct at 13° Libra, and Mercury at 14° Gemini opposite Black Moon Lilith.  The Aquarius Moon is flanked by Juno and Neptune, who form squares to Jupiter and Mercury.  (The Uranus/north node trine is marked in bold for reference, since it is the aspect that defines the moment of this chart.)

This chart perfectly depicts overstimulation.  Uranus in 3rd decan Aries is uncontrollably hazardous, the north node in Leo puts us in the spotlight.  The potential for greatness has never been higher, which comes with the perception of pressure being higher than ever.  Juno retrograde in Capricorn is challenging motionless Jupiter. In cahoots with her brother Pluto, she’s giving Jupiter orders to build new boundaries out of the wreckage of the old.  Mercury is amplified by Jupiter and distorted by Lilith, and the square to Neptune makes his expression a punk rock, naked scream.  The Aquarius Moon pours it into the scream/stream of the collective story…

Between June 13th(North Node trine Uranus), and June 15th(Sun opposite Saturn), the Moon crosses the south node, bringing us to the subconscious well where the scream/stream begins… 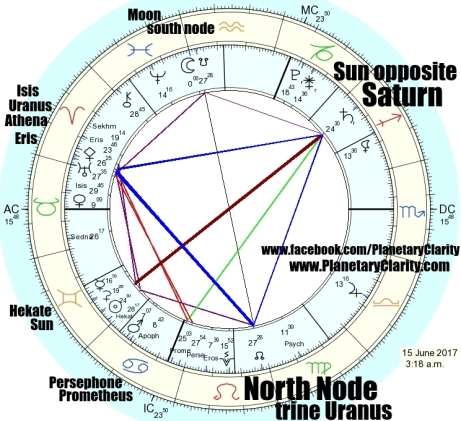 Hekate, the Oracle and triple goddess is in her full glory at the crossroads, aligned with fixed star Betelgeuse in Gemini, she precedes the Sun and is transiting the exact midpoint of the Uranus/north node trine. She will meet the Sun and Mercury at Zero Cancer on Summer Solstice.

Uranus is moving away from his long time companion Eris at 23 Aries, but right now they are joined by Athena and Isis, each having their own 3rd decan Aries moments, at  the front of the battle, and in maximum burning heat.  Sekhmet is bringing up the rear at 19 Aries, at a steep negative declination and rising.  If you or people in your life have natal placements in 3rd decan Aries, you might be able to recognize that 3rd decan Aries is currently a party from hell in a beehive on acid, a volcano of molten honey, stingers on fire, a cacophony of frantic buzz.

Persephone in Cancer falls into perfect resonance with the mean lunar nodes as she meets Uranus in an exact square.  She has been subdued in Cancer, but received a huge boost of strength from her opposition to Pluto.  She is holding her head high with a push from Uranus, ready to blaze into Leo. Her companion Prometheus has not received the same push yet, he is holding down an exact quincunx to Saturn, and square to Eris.

A legal scholar named Ronald Dworkin once said, “Playing God is indeed playing with fire. But that is what we mortals have done since Prometheus, the patron saint of dangerous discoveries. We play with fire and take the consequences, because the alternative is cowardice in the face of the unknown.”

Maybe right now cowardice is a blunt and insensetive way to describe how we are dealing with the overstimulation and pressure I outlined in the first chart.  I’m honest enough with myself to acknowledge that I continue to suffer from things that I am not really working on solutions for, because reasons.  More about this later when I get into Sun opposite Saturn. Prometheus in Cancer, square Eris and quincunx Saturn, is a dampened and demoralized Prometheus.  But he is picking up speed after his recent retrograde with Persephone and soon they will both be charging through Leo, Persephone in her opulent summer phase, and Prometheus in full fire-stealing mode, transiting conjunct the north node and meeting Saturn in a trine at the end of August.

Not shown on the chart because there is so much happening already: Ceres in Gemini quincunx Pluto in Capricorn, which featured prominently in the Sagittarius Full Moon on June 9th, was a meditation on how to handle all this pressure. “Sun conjunct Ceres in Gemini, quincunx Pluto in Capricorn reminds me of how plants sometimes grow sturdier and more robust when they are under some type of duress.”

The Moon at Zero Pisces

As I mentioned, the Moon crosses the south node during all of this, and at the exact moment of Sun opposite Saturn, the Moon sits at Zero Pisces.  The Moon has been at Zero Pisces during some incredibly prominent astrology in 2017, and seems to be touching the planets in order.  Look:

May 19th, Moon at Zero Pisces during Jupiter opposite Venus, where Jupiter was beginning to station direct and Venus was clearing the point where she stationed retrograde.

Which brings us to June 15th and Moon at Zero Pisces during Sun opposite Saturn. 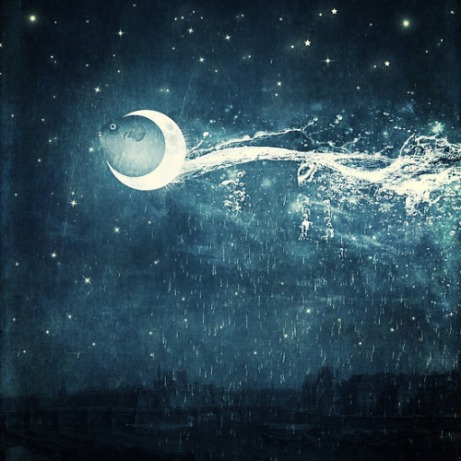 The Sun-Saturn cycle carves our maturity into a more refined expression, as we struggle to individuate within the parameters of our generation, our place in history, and society.  The current cycle began with Sun conjunct Saturn in December of 2016– which was energetically dominated by the Moon transiting conjunct Ceres as she stationed direct between Uranus and Eris.  The Moon, Uranus, Eris, and Ceres all met the Sun-Saturn conjunction in a trine.  The Moon went on to complete the Gemini Full Moon opposite the Sun/Saturn conjunction.

The Tarot cards I drew during that full moon for this cycle of Saturn in Sagittarius were The Empress, The World, and Priestess. The Empress represents the sign of Sagittarius and the Sun’s transit through it- Empress gives birth endlessly and explosively, filling every empty space with her creation.  The Priestess represents Saturn, forever pregnant, forever laboring and waiting, holding all knowledge and wisdom a secret in her belly.  Between these two opposites, The World represents total balance and harmony with the natural laws of the universe.  This is the essence of the relationship between the Sun and Saturn- the endless quest for progress defined by reaction to obstacles, the unbearable tension between “can” and “can’t” that whirls wildly around our existential center. 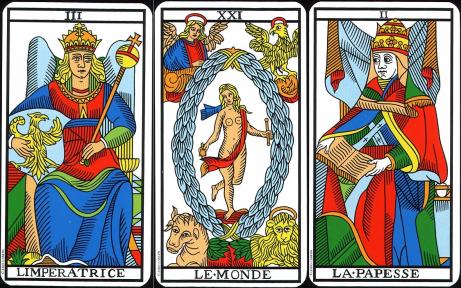 The opposition between Sun and Saturn is a fertilization. It is where solutions begin to appear. The limits that have given us issues since the Sun/Saturn conjunction last December, and developed into major challenges that were very personal in March when the Sun transited conjunct Chiron in Pisces and formed the first square to Saturn, are now going to blossom into the next chapter.  The trine between the north node in Leo and Uranus in Aries is a once in a lifetime chance for a quantum leap in adjusting what you’ve established as your everyday reality.  The answers we need are on the way.  They are already here, and they are on the way.

During the solar opposition, Saturn is met most closely by the trine to Eris in Aries and the quincunx to Prometheus in Cancer.  As mentioned earlier, Prometheus is square Eris.  The triangle formed between Saturn, Eris, and Prometheus is a discussion about the alternative to taking risks and making changes: it’s a giving-up, it’s deciding it’s not worth it, it’s a joyless acceptance, a settling.  Everything else happening around Saturn is urging us to break away.  Before long, Prometheus will get his turbo boost from a square to Uranus, and then enter Leo.  This August will bring the astrological events of 2017’s incredible Lion’s Gate Leo Season- the final Lion’s Gate activated by a trine from Uranus that we will see for the rest of our lives.

We are about to turn the corner into what is sure to be a transformational summer.   On the eve of summer solstice we have a pentagram yod featuring Moon conjunct Venus in aspect to Neptune, Juno, Jupiter, and Apophis; on Summer Solstice we have Sun conjunct Mercury and asteroid Hekate at Zero Cancer; followed shortly after by the throat-chakra-cleansing New Moon in Cancer.  Stay tuned to Planetary Clarity for all this and more.

One thought on “North Node Trine Uranus -and- Sun Opposite Saturn”