The Pisces Sun is eclipsed by the Moon while trickster Apophis makes a superior solar conjunction… Mars in Aries transits conjunct Uranus and Eris, opposite Jupiter stationed retrograde in Libra… Venus in Aries begins to fall back into the Sun as her next retrograde approaches… and Lilith, the mean lunar apogee, squares the lunar nodes.

This is Rodeo.  The most exciting and most dangerous competition, bound to the history of the people of this continent.  I worked for an event security firm in college, and between the years of 2005-2006 I was hired to work at various rodeos in the region. (Imagine my delight when I just discovered that those years were the same as the previous round of eclipses in Pisces!) It was a mind bending experience, unlike any other sporting event or festival I had ever witnessed.  Rodeo is a pageant of karma where bodies and fates achieve thrilling glory or fall splattered in the mud. I realized that Man vs. Beast is a metaphor for Man vs. Himself, and the words “space cowboy”took on a new fractal definition of someone who has surrendered their ego to the weavers of fate.  Space Cowboys sharp as knives from living on the edge, always freshly injured, always almost healed.

This is the last of the Pisces eclipses from 2015-2017. Pisces is the realm of the subconscious, which is where our true motivations are hidden.  The south node evokes past lives, and the karma we are seeking to transform.  Neptune’s presence in Pisces since 2012 has caused extremes in both awakening and delusion. Awakening and delusion both create unfamiliar circumstances, which causes us to seek out old familiar patterns, usually supplied by the unexamined subconscious shadow. When the Moon eclipses the Sun in Pisces on the south node, we have a rare opportunity to access the contents of our subconscious- which not only includes our personal shadows but also cellular memories and messages from our ancestors.  This is a time of reckoning, deep cleansing, a true pageant of karma unfolding, time to test the skills and bravery of our higher selves against the bucking rage of our beast-selves, and as chaos magician Apophis sits cackling behind the eclipse, the Wheel of Fortune spins…

And for those of us who are located in the right place on the west coast of the united states, the Pisces New Moon conjunct Apophis takes place at the exact moment of sunrise… in other words, conjunct the ascendant.  If you are in this zone and/or have a major natal placement between 3 and 11 Pisces, the next 6 months of 2017 will give you what you really want right now: the opportunity to prove what you are made of, the chance to go from face down in the mud, to triumph, glory, and gold.

Jupiter recently stationed retrograde at 23 Libra and is still relatively motionless at 22 Libra.  Less than 10 hours after the eclipse, Uranus advances to 22 Aries right before Mars exacts his conjunction, seen here: 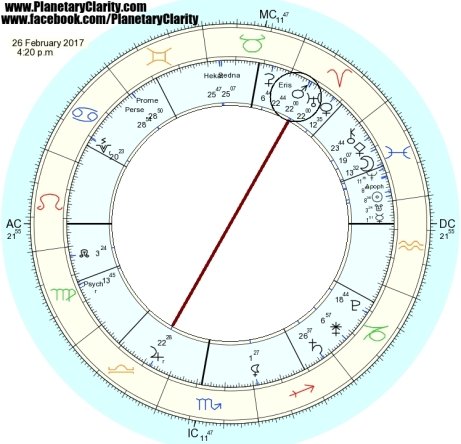 All text in quotes from The Future Minders:

“In any type of competition, this element of surprise can give you an edge… Outcomes are unpredictable, and unforeseen events can set you in a new direction. Being free to do something uncommon keeps you sharp, and actions may involve taking risks that excite as well as agitate you. Because you react so suddenly, you are prone to fluctuating desires…. The physical energy that you feel during this time may be hard to control… Your actions tend to be wild and erratic and you’re extremely restless when confined to a small space or a rigid schedule. You want total freedom in your actions and will strongly rebel against any restrictions. ”

“Although you may achieve unparalleled success at this time, the wheel of fortune may turn in unforeseen ways bringing a sudden shift in your direction. Significant changes can occur now where you can make a 180-degree turn in certain areas. Disruptions are likely as discontinuity is a feature to this cycle. Despite the inconsistency, the time is appropriate for progress even for exceptional expansion, but it sometimes comes too fast and too soon, making it difficult to manage….. Circumstances may provide the impetus to move forward if you are stagnant. You can experience unprecedented freedom, or tension that comes from wanting it but being unable to achieve it.”

“You generally have a streak of restlessness and any situation that seems confining may motivate you to make an impulsive decision. A proactive choice to achieve something better not only for yourself but for all concerned is more likely to bring favorable results than a reactive response to get away from something or someone. Outcomes can exceed your expectations now… If you’ve felt restricted in business or other people have been unnecessarily interfering with your progress lately, these tensions will all come to the surface now. You may lash out at others or direct this energy into impulsively expanding your projects to release the frustration of being on hold. Either of these responses will be a waste of your energy and you should use this time to get more organized and prepared to take productive action. Use these obstacles to gain a better overview of the whole situation and more perspective on how to expand your projects in a steady way.”

Eris, like Apophis, operates within themes of chaos. Apophis embodies the trickster, throwing chaos bombs to eff with order, causing us to question our identities. Eris completely transcends definitions of order and chaos, and in this transcendence she makes it possible to perceive our identities with objective detachment and radical clarity.  Her influence on the interactions between Mars, Uranus, and Jupiter unites these themes to the Space Cowboy Rodeo Solar Eclipse in Pisces, and guides us to our New Moon intentions:

-=-Explore what “success” and “failure” mean to you personally.  There are just as many different definitions as there are humans.  Take a few minutes to meditate on why/how the exact same scenario that means failure to one person can be a success to someone else.

-=-Expect that you are going to be experiencing successes and failures in a way that seems rapid, random, unpredictable, and based off of good or bad luck.  Do not allow feelings of luckiness or unluckiness to deter you from doing the work that it takes for you to bring your A-game.  The only thing you can control is how fit- how prepared- you are to meet your fate.

-=-Believe that your greatest success can occur very soon after a perceived failure- the opposite is also true. Therefore, resist celebrating when you experience success; Resist discouragement when you experience failure. Both are temporary perceptions- observe situations as they unfold without reacting emotionally.  If you can accomplish this epic feat, you will access valuable life lessons that will help you advance on your karmic path.

One thought on “Solar Eclipse in Pisces – Rodeo”