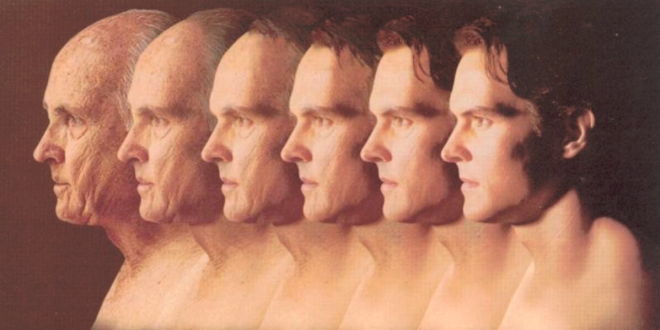 This week, as Mercury hangs motionless aligned with the center of the galaxy, and without any close or major aspect, we step back, we step up, and we take a deep stare at the entirety of the problem.  Messages from all sources are extremely condensed.  What would have once taken three weeks to explain, can now be expressed in five paragraphs. The veil is gone, energy peaking and breaking on January 8th just after midnight as Mercury stations direct. 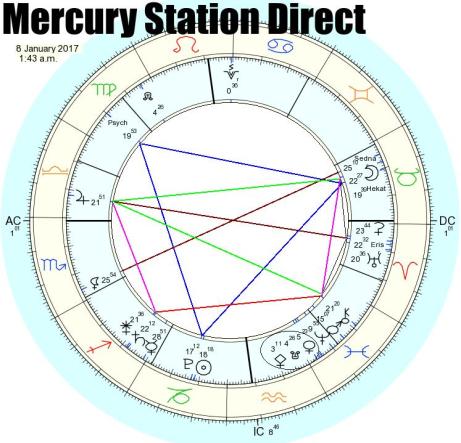 Let’s begin with the Moon in Taurus, transiting between Hekate and Sedna, both of whom are a part of strong and important aspects.  But first: shortly before Mercury stations direct, the Moon forms a sextile with Chiron in Pisces, and in turn, a yod to Jupiter in Libra.  Chiron and Jupiter are still of course united in aspect with Saturn and Juno in Sagittarius, and Ceres, Eris, and Uranus in Aries.  This Moon transit during Mercury station direct is ripping the lid off of the containers where we keep our anxiety, blasting  beyond the shields we keep over our triggers, and in this moment we are eyes wide open to the things we try so very very hard to work around- or the things that we have been working on, but feel like we are trying to dig a tunnel through a mountain, all alone, with a shovel, and no real hope of ever finishing.  We know that it is time to start doing things differently. This isn’t an easy process.  The Sun exacted conjunction to Pluto shortly before Mercury retrograde also, so depending on how Pluto is currently active in your natal chart, this could be an incredibly intrusive process.  But no matter what, none of it should be a surprise.  If it is a surprise, you must have been willfully not paying attention.  We are witnessing endgames, things coming to a head, the unresolved things that we keep in the background are coming to an end.  And we can be a part of this process.  We can do it on purpose.

Hekate and asteroid Psyche in Virgo are joined in a long term trine, stretched out by Psyche stationing retrograde, and Hekate stationing direct.  As the Sun separates from conjunction to Pluto in Capricorn, it will form a grand trine with Hekate and Psyche.  The meditation that will bring out the best of this is what I call praying to Hekate.  She is the original triple goddess, all-one, maiden mother and crone.  She sees past present and future simultaneously.  Hekate’s gift is not to show you the way.  Hekate’s gift is for you to learn that you wear a crown of stars and you can light the way for yourself. With the Sun in Capricorn, we can breathe our life force into the creation of structures, with Psyche in Virgo, we can take a good hard look at ourselves and get our shit together.

“TransNeptunian planetoid Sedna in Taurus is opposite Black Moon Lilith in Scorpio- Lilith is not an asteroid, it is the mean lunar apogee, the point in the Moon’s orbit that is farthest from Earth.  This means Sedna is now aligned with the mean lunar perigee- in other words, when Sedna is opposite Lilith, the Moon will be at its closest point to Earth when it transits conjunct Sedna.”

“Sedna represents themes of betrayal, physical trauma from assault, and the psychological fallout of bearing the permanent scars of abuse.  Sedna is a type of underworld goddess, she resides at the bottom of the ocean and rules over the sea creatures, according to myth she created them from the pieces of her mutilated hands.  She easily carries the darkest parts of who we are.”

So to summarize: before Mercury station direct, the Moon activates the outer-planet alignment between Jupiter, Saturn, Chiron, and Uranus, and the Sun transits conjunct Pluto; after Mercury station direct, the Sun activates Hekate trine Psyche, and the Moon transits conjunct Sedna, at the point of the Moon’s orbit that is closest to Earth.  We are being brought ever closer to the root of our trauma.  Our ability to embrace and integrate this darkness will determine our ability to transcend it and heal.

Which brings us to a purely medicinal place in our solar system:  Venus and Athena flanking the lunar south node in Pisces.  On January 1st, the Moon transited conjunct Venus for the 6th time since Venus rose as the evening star, which represents the opening and awakening of the third eye chakra. As we follow Venus across the south node, we will make connections of understanding the patterns that have led us to this moment- it’s up to us to decide whether to strengthen and continue the pattern, or to identify how to break and escape.  The longer these patterns have been in play, within this incarnation or stretching back many lifetimes, the more difficult this choice will be.

Healing is often a process that is deeply disruptive to the personalities and lifestyles that we built before we started healing, before we could even describe or name the trauma that has been done to us.  We have come so far in this process.  We know what has happened to us.  We own our story.  But in some way we are still hanging on to the life and identity that we had when we were broken.  This is our life’s work, to continue to heal, to continue to let go of the past, to continue to pack our psychic space with the new tools that have found us.  So many of us have acquired tools that we have not yet learned how to use.  2017 is going to be a big year for us.