I find myself in a familiar place on the spiral of my life path, higher than I’ve ever been, but as I look forward to what comes next I realize that I am once again approaching the spot on the circle where I am facing my pain.  I have been here again and again on my journey of ascension, confronted by the limits that my trauma has forced me to impose on myself, confronted by prompts to heal.  Many times I have come to this point and turned and walked away, choosing to stay closed tight in a bud because I wasn’t yet ready to face the pain of blooming.  Many times I have realized it was time to bloom, but just sat in that moment, stalling at the crossroads with Hekate’s black dog, unpacking the things I knew I would have to leave behind to take that next step.  And many times I have taken that step to bloom, to heal, to be my authentic self and breathe out into the new space of another self-imposed limit shattered.

We can easily glance back and take in the enormity of our success, take comfort in how far we have come, and wrap ourselves up in the love and safety we have worked so diligently to create.  And yet, here we are… again… only now we are finally at a vantage point high enough to take it all it at once.  As we come back around to this point in the spiral, we hold ALL of those previous experiences of this point in this one moment: holding on to our pain because we are too afraid to trust the healing process; doing the work of unpacking at the precipice of a breakthrough; making the painful decision to open up the places we’ve so desperately defended, to receive the return of our broken parts- synthesized into one unified reality- this is the New Moon Solar Eclipse in Pisces of 2016. 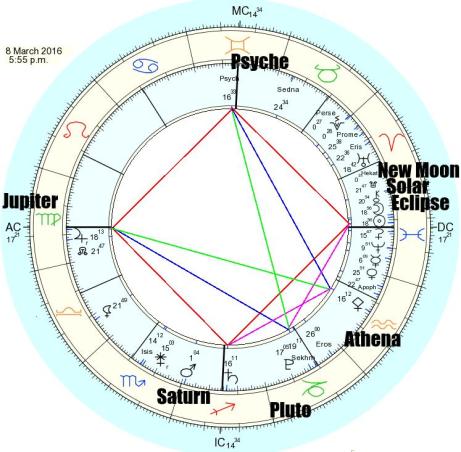 At 5:55pm on the west coast of the united states, Jupiter retrograde rises over the horizon as the eclipsing sun sets on the descendant, not visible from the west coast but carving a path of totality through the radioactive contamination of the northwest Pacific Ocean.

Less than three degrees from the south lunar node, the Pisces New Moon at 18 Pisces is conjunct Chiron and exact opposite Jupiter retrograde in Virgo.  Saturn is at 16 Sagittarius opposite metal asteroid Psyche at 16 Gemini.  The T-square between the eclipse, Jupiter and Saturn is visible on a macro global level- this is without exaggeration one of the most exciting, important, difficult, and scary moments in the history of human consciousness.  The T-square to Saturn/Psyche stresses the effect of the conjunction with Chiron, the wounded healer, into a dramatic confrontation with the wound.  Psyche tells the story of Ecdysis, the shedding of skin or exoskeleton.  Psyche square Jupiter gives us the key to the door, the way in to and (Psyche quincunx Pluto) ultimately out of the layer we’ve outgrown. Athena in Aquarius, trine Psyche and sextile Saturn is the all-seeing eye of wisdom that holds us together at the core when we are splitting out of ourselves in transformation.  Pluto, conjunct Sekhmet, sextile the new moon solar eclipse, embodies our transformation.  Sekhmet opens the way.

I found some great insights into the factors that influence the energy of this eclipse and this moment in time by splitting it into three different charts- one for the objects at 15-16 degrees, another for the objects at 17-20 degrees, and the third showing the objects at 21 and 22 degrees. The first chart shows three of the four major goddess asteroids gathered in resonance around Psyche and Saturn.

With so much focus on the new moon’s conjunction to Chiron, many have left out completely that Ceres, at 15 Pisces, is downright snug under the embrace of the eclipse, and she strengthens the connection between the eclipse and Saturn/Psyche. Ceres is exact trine Juno retrograde in Scorpio.  Withdrawing in order to feel safe can be healthy if self-care is on point, or it can make the transition extra difficult by making it harder than it needs to be to reach out and talk about what’s wrong.  As you see the Sun in the sky, feel out for Ceres, and lean in to the eclipse on Ceres’ supportive shoulder.

The chart for 17-18-19-20 degrees is an easy to digest summary of the basic themes of this eclipse. A narrow eclipse corridor between Jupiter retrograde conjunct the north node, opposite the new moon conjunct Chiron (and Ceres) on the south node.   At 17 and 19 degrees of Capricorn, Pluto and Sekhmet straddle a trine to Jupiter, sextile to the new moon eclipse, and square to Uranus.  Uranus quincunx Jupiter carries the imperative we all feel to do our part to transmute the unbearable tension that is unfolding on a global scale into the best possible future, and the great goddess Sekhmet offers guidance to Pluto, the bringer of righteous destruction.  Pluto, trine Jupiter, and sextile the new moon eclipse, shows that the way forward is through a triumphant, yet brutal transformation.  The word for a molted exoskeleton is Exuvia which means “that which has been stripped from the body” in Latin.

Behind all of our trauma, behind the courage and fear, beyond the planets, beyond our bodies and minds, the lunar node axis at 21 degrees of Virgo/Pisces, in resonance with three of the most chaotic characters in the entire sky.

Lilith in Libra is closing in on her month-long opposition to Eris in Aries.  Eris is the figurehead of discordianism, the philosophy that “both order and disorder are illusions imposed on the universe by the human nervous system, and that neither of these illusions of apparent order and disorder is any more accurate or objectively true than the other.” (wikipedia) Lilith opposite Eris challenges our very notions of what it means to be a broken person vs. being a healed/whole person. We should consider that both are equally valid/accurate and equally invalid/inaccurate ways to describe ourselves.  With Lilith quincunx the south node, and Eris quincunx the north, we are compelled to make peace with the past, because we know not what the future holds, we have not yet met the version of ourselves that we will be on the other side of this passage.

How fitting that Apophis, the original chaos fucker, would be trine Lilith and sextile Eris at the moment of the new moon solar eclipse.  Apophis is relatively quick, moving at approximately the same speed as Mars, so while Eris opposite Lilith is long-lasting, the shock from Apophis is momentary.

If you would like some guidance regarding the way that these configurations are affecting your life by interacting with the energies of your natal chart, please contact me at either of my facebook pages linked below.  I offer a sliding scale of $25 to $50 (paypal) for personalized charts with in-depth interpretation. 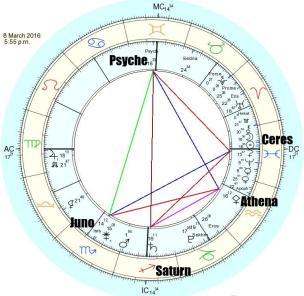 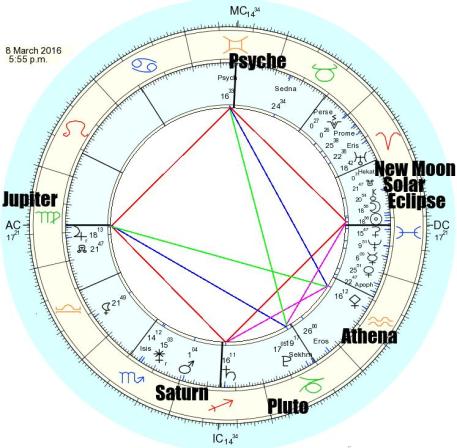